This post may contain affiliate links. This just means I get a small percentage of the sale if you purchase through my link – at no extra cost to you. You can read my full disclosure here. Thank you for your support! 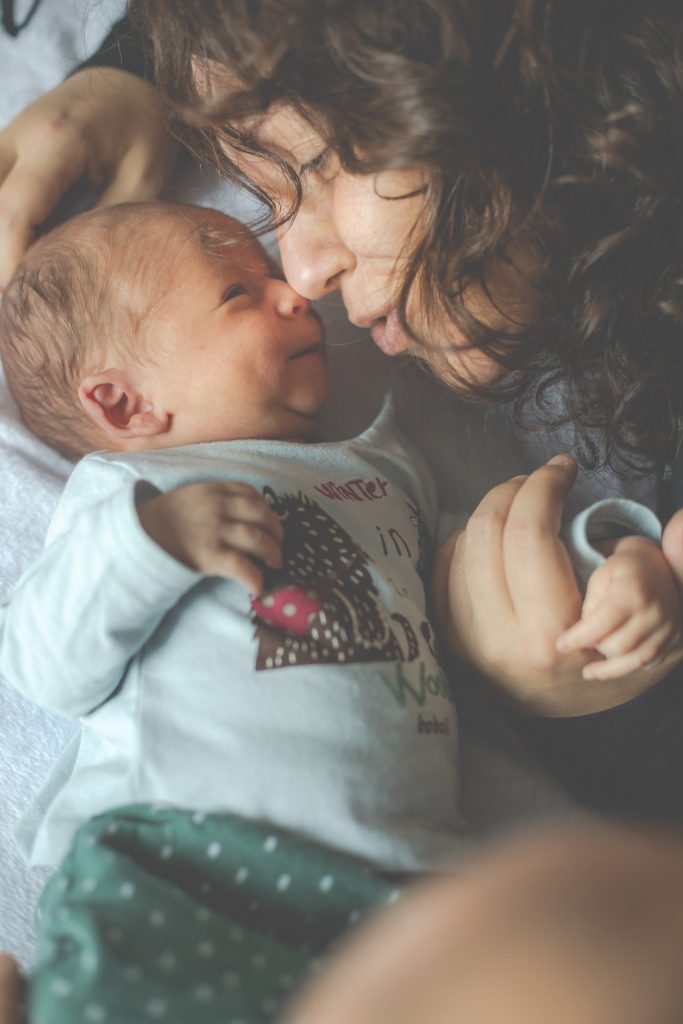 Lullabies are one of the most common types of songs that parents sing to their babies. For generations, parents have sung lullabies to their babies all across the globe!

And while the words and melodies vary based upon the musical characteristics of that society and culture, there are numerous similarities. It is those similarities that make lullabies such a wonderful choice for parents.

What makes lullabies so wonderful to sing to baby?

Without a doubt, lullabies are one of the best types of songs to sing to your baby. In addition to the benefits, lullabies are great for many other reasons! Here are just a few:

In fact, did you know that newborns actually prefer your unaccompanied voice?[1] That just means they like hearing you sing without other instruments or music playing in the background.

Unfortunately, singing to your child is much less common than previous generations. With the use of video and audio recordings, many parents simply turn to other means of playing lullabies for their children rather than singing to them.

By playing your child music only through CD’s and other streaming devices, your child will not have that special connection they get when you sing to them!

Why should I sing a lullaby to my baby rather than play a lullaby CD?

Did you know that singing lullabies helps produce calming and soothing effects for both you and the baby? And not only that, but singing helps you develop a deeper bond with your baby! So, consider learning to sing a lullaby to your baby rather than just playing a CD. If you want more reasons why you should sing to your baby, check this out:

Just remember that singing (lullabies, in particular) is not only beneficial for your baby, but also for you! Their slow tempos and easily sung melodies combined with dreamy, night-themed texts make lullabies a perfect way to help settle your little one to sleep AND to help you as a parent temporarily destress.

So, without further ado, here is a list of six common lullabies that are sure to help your little one fall asleep and build a stronger bond between the two of you. 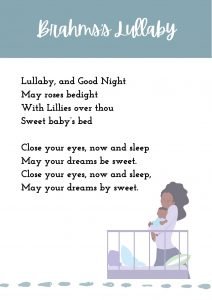 I couldn’t have a list of lullabies without this one topping the list. It’s an absolute classic by any means! In fact, this song is probably one of the most common songs to be played on the mobile over the baby’s crib or on those pull-string music boxes.

Brahms’s lullaby song ticks all the boxes of what we expect a lullaby to sound like. It’s got a relatively easily singable melody, several phrases of the melody repeat, and, of course, the text is about falling asleep and dreaming sweet dreams!

It is rumored that Brahms wrote this melody because he was had trouble sleeping and wanted a relaxing song that helped him sleep.

Now, if you are fluent in German, you can sing the original text, which is from an old collection of German folk poems. But if you aren’t, there are several English translations that you can sing. This is definitely one of those texts with a number of variations in the English language.

I never really found one that I thought was super simple to sing, so I’ve changed a few words here and there to come up with the following. It’s repetitive and I love that I can use my child’s name. 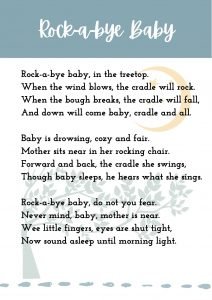 I think this is also a classic lullaby that most people are familiar with and as with many old traditional songs, it is based upon a nursery rhyme that has truly stood the test of time. I grew up hearing this song and do still sing it to my children although they prefer others now days.

Most people are probably pretty familiar with the first verse, so if you get tired of singing only the first verse for the thousandth time, take a peek here at the additional verses.

If you do prefer a less disturbing version, try this one in place of the first one:

Rock-a-bye baby, in the treetop,
When the wind blows, the cradle will rock.
Softly you sway and softly you sleep,
And drift into Dreamland, sweet and deep. 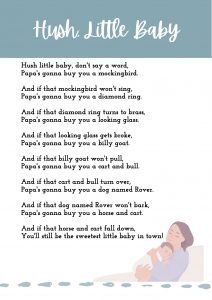 This is another song based upon a classic Mother Goose nursery rhyme. As with almost any song, I’ve found multiple versions of this text. But this is a perfect starting point for learning a new lullaby.

It’s incredibly easy to remember because the same two melodic phrases are repeated over and over throughout the song. It also has a great rhyme scheme to it, but it’s one that you can’t play with, too! Make up your own things and see if you child recognizes the silliness or changed up words.

In fact, my daughter laughs when I purposely sing the wrong words! Of course, I make it a game but children usually pick up on small changes like that if they’ve heard the original song enough times.

And, of course, depending who is singing the song, you can use either Mama or Papa (or Daddy). It’s flexible to suit your needs. It is nice to see a nursery rhyme/song that talk about Papa, too. 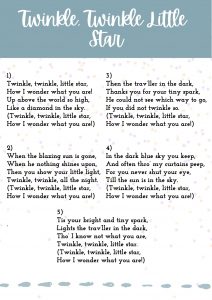 I was hesitant to put this song on the list of lullabies, but as it turns out, many of you consider this a lullaby.

First off, the theme is about twinkling stars and nighttime wanderers, which are definitely nighttime themes. And second, if you sing this song at a slower tempo, the melody still is perfect as a lullaby – simple, repetitive, and easy to sing.

The melody of this song is incredibly versatile and can be used in a number of ways. Did you know it’s the same melody that’s used in the ABC Song and Baa, baa black sheep?

Keep in mind that the rhyme was written before the music, so there are a few places where the other stanzas lines up with melody a bit differently. Just play with it until you find something that you like. And the repeated lines added in parentheses are not part of the original nursery rhyme, but rather part of the repeated text in the sung version. 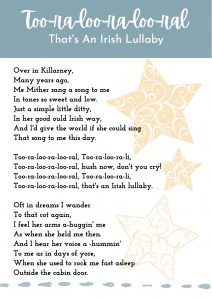 Hands down, this is one of my favorite lullabies to sing. I first heard this song when my mom sang it to my daughter when she was a newborn. I only heard it in passing, but it was so striking – I couldn’t help but learn it.

Unfortunately, being a mom with a newborn as I was then, I could only remember the melody and hardly ever the correct words. I even looked it up and tried to memorize it, but you know… with the typical lack of sleep a new mom has, memorizing was not my strong suit.

So, I started humming the melody as often as I could and when my son came along, I played around with the words and made him his own version with this melody. It’s now his lullaby and I sing it to him every time before bedtime.

Interesting fact: Bing Crosby made this song popular back in 1944, but it was originally written by James Royce Shannon, a prominent composer in the early 1900s. It’s been covered many times since then but Crosby’s version is a classic.

But what I love about this lullaby is its simplicity. The words might seem a bit sad, but it’s actually a comforting lullaby with its repetitive melodies and simple, short lines. If it’s too much in the beginning, just focus on the refrain (the “Too-ra-loo-ra-loo-ral” section); that part by itself is wonderful to sing.

Now, I’m not sure how many of you know this song, but it’s originally a German song. It was originally composed as a lullaby and set to text in 1950 by a composer named Heino Gaze. This song is not yet available under public domain laws, so I cannot, unfortunately, provide you here with the lyrics and melody.

If you want to hear the original German version, I highly recommend the version by Anneliese Rothenberger and Detlev Lais. But for your little ones, check out this Disney Junior version.

My daughter loved this lullaby and for some time, asked me to sing it to her. But since it’s in German, I had to change the words a bit and it was therefore a mix of German and English text. This song is also a personal favorite of mine – it’s one of those songs brings me happy memories.

It has a beautiful melody throughout and the song is essentially of the moon watching over the little babies while they sleep and the Sandman picking out only the best dreams for your little one.

Don’t know German? You can still hum to melody! I highly recommend listening to this a few times because it actually works wonderfully as a hummed melody as well. As with most lullabies (and most popular songs) it’s repetitive, which will help you learn the melody faster.

Know that your newborn or infant truly enjoys your voice – it is unique to them. Choose a lullaby to sing to your baby – any lullaby will do!

I realize that this is only a small selection of songs, but I hope these give you some inspiration for singing to your child or perhaps just to add a new song to the ones you already use. And if traditional lullabies aren’t your favorite, then check out these Disney movie lullabies. They are perfect for parents who aren’t confident singers!

Which lullaby do you sing to your little ones? Let me know in the comments below! I’m always on the lookout for further inspiration.

Scroll to Top
We use cookies to ensure that we give you the best experience on our website. If you continue to use this site we will assume that you are happy with it.OkNoPrivacy policy